The joy of retargeting

Retargeting for fun and profit is best done with a scalpel, not a bludgeon.

It’s part 2 of our look at how to harness digital channels creatively to deliver more effective ads (see part 1, here). This one starts with pair of shoes. Specifically a pair looked at once, three weeks ago, that has been stalking us around the web ever since. That’s not just annoying, it’s a missed opportunity. It’s harder to sell to people who find you irritating, after all. There’s a better way to do this: put down the bludgeon of endless repetition and start using retargeting intelligently to deliver brand distinction and affinity as well as sales.

Retargeting is based on a fairly obvious insight: you may still be interested in things you previously showed interest in. So, you get shown adverts for those things. In practice, that means you get stalked across everything from Facebook and YouTube, to news websites and apps, by endless ads for a product you last looked at three weeks ago. They just won’t leave you be. It’s like being nagged by Mrs Doyle.

This is what drives so many people to install adblockers.

Those endless reminders nudge enough of us to action for it to be worth doing: retargeting ads are 10x as likely to be clicked as other display ads and stay effective for longer.  While normal display ads convert less the more we see them, retargeted ads get more effective with repetition, up to a point. Clickthrough rates actually go up the more we see them, finally getting old when we’ve seen them more than six times. And that’s why you are being stalked. So yes, retargeting is a powerful tool in the endless battle to convert. And you’d expect us to use it as part of your integrated campaigns. We do.

…Everywhere you look the retargeted ads are about as memorable as an accountant’s after dinner speech.

If it works, what’s the problem?

Here’s the problem; advertising effectiveness is declining. Bludgeoning home the same messages ever more often doesn’t seem to be working. But when you read performance marketing guides on swapping out creative to “keep things fresh,” they recommend changing the background colour and the like. Bluntly: that isn’t going to make your ad impression stand out from thousands of other ad impressions that Google and Facebook will serve  you today.

As our recent piece on creativity and data showed, we can create incredibly effective and profitable ads by coupling the possibilities opened up by adtech, with emotionally powerful messaging. The same is true of retargeting: used with the precision and care of a scalpel it’s a powerful creative tool for sparking emotional responses and spontaneous recall.

Just how much more effective would retargeted ads be if the payload weren’t so achingly dull?

3M showed the way with its recent Post-it note campaign.

Instead of that same damn ad following you around forever, this campaign allowed you to create digital Post-its for stuff you actually need to remember. Your reminders and notes then followed you around the web. It’s a use of retargeting that’s helpful, memorable and smart. A banner that firmly embeds a brand in your mind is, sadly, rare.  A banner that makes you like banners doubly so.

Or, look at this breast cancer awareness campaign from New Zealand that used the very persistent, annoying, nagging aspect of retargeting to get women to sign up for a mammogram.

Women over 40 were shown a simple ad depicting a tiny lump like those found in very early stage breast cancer. With every retargeted exposure to the campaign, the lump grew larger and the messaging more urgent until it became impossible to ignore. The only way to get rid of the ad was to click through and book an appointment.

It wasn’t just sheer persistence that made this campaign so successful, it was the story progression: knowing someone had seen previous ads, the narrative moved on a step. You didn’t have to see every step to experience the crescendo of urgency, and they brought storytelling to a medium notorious for its lack of imagination.

The results speak for themselves:

That’s what you can achieve by tightly coupling smart targeting and great creative. This isn’t a channel-specific idea, it’s entirely consistent with a brand-response approach. Performance tactics married to a great creative strategy drives both short-term conversion and long-term brand effects, making it the single most profitable form of advertising. 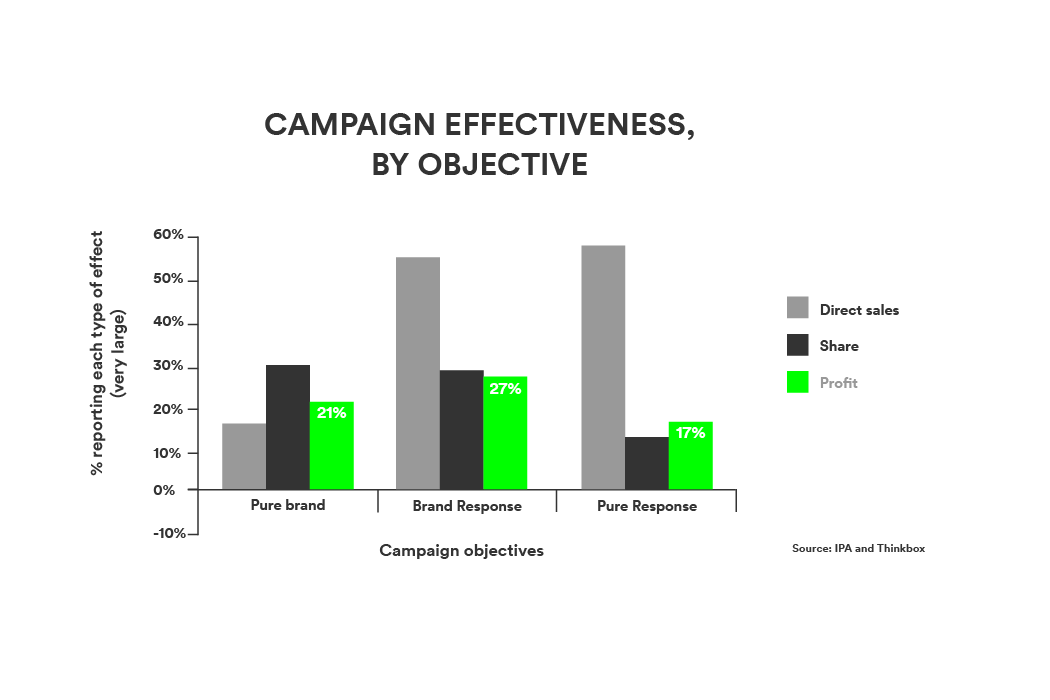 Getting creative with adtech

Given the possibilities of the new tech, and the results we can achieve by using them creatively, it’s disappointing to see the lack of imagination with which they are often used. Just looking at retargeting, we can deliver ads based on whether someone has visited your site, watched a video on YouTube, engaged with a social post, seen a particular ad, and even where they’ve been in the real, physical, world.

To us, that sounds like a recipe for treasure hunts, teasers, naggers, episodic storytelling and creative that responds to what you’ve seen and where you’ve been. It’s a smorgasbord of possibilities for getting inside your customers’ heads, creating something memorable, making them laugh and persuading them to give up just one moment of their precious time to pay attention to your brand and enjoy what they find.

Instead, we keep getting chased around the web by a pair of shoes.