Can you pull heart and purse strings at the same time?

In our super-connected world, opportunities for brands are fleeting. There’s more pressure than ever to snatch every micro-moment of customer attention and make it count. Against this backdrop, you can see why a pure brand campaign can feel like a luxury – especially when direct response delivers instant sales. Is there a way of bagging the short-term ROI while building long-term brand connections?

Just think about your favourite ad… The story. The craft. The track.

When a brand connects emotionally, it’s a beautiful thing. It’s not the product that lingers, it’s a feeling: The Dairy Milk gorilla made us laugh, Guinness’s white horses got our hearts galloping, the Superhumans had our jaws dropping in awe.

No-one doubts the value of a strong brand. Or the role creativity plays in delivering powerful emotional connections. But do they translate into sales?

Ask John Lewis – a brand that regularly splurges £7m+ on Christmas without so much as a blink. They’re definitely not strumming heartstrings for a laugh, as their ex head of marketing Rachel Smith explained to The Drum:  “Our TV campaigns at Christmas are our most profitable ROI, which demonstrates that when you invest in creativity and in creating memorable brand building campaigns you not only create short term commercial success, you build the brand over the long term.” 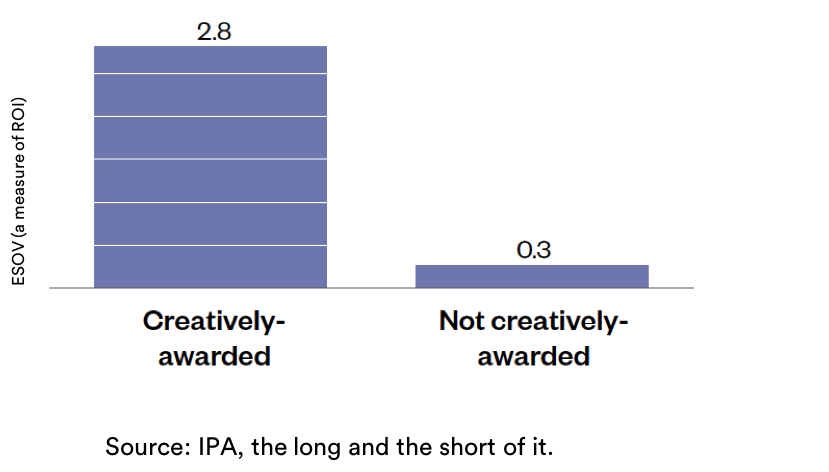 The link between creativity and effectiveness has been laid out by the IPA in Binet and Field’s recent and powerful study “The Long and the Short of it”. It makes logical sense that the more people are aware of your brand, the more likely you are to be front of mind when the time comes to buy. And when your brand triggers a positive emotional reaction – whether conscious or not – it can be enough to nudge them your way.

But the fact is, most of us don’t have £7m and a monster called Moz to call on. Cloth has to be cut. And there are a couple of big problems with pure brand campaigns.

One, there are less tools immediately available to measure impact.

Two, it takes longer to see a return.

Without the stats to prove a campaign’s effectiveness, we can get a bit twitchy. Binet and Field suggest it takes three years to fully see the impact of a brand campaign on sales. Which is why for many, a pure brand campaign feels like fair-weather extravagance that smaller market players simply can’t justify.

A date with data

It provides us with the insight and measurability that our marketing and finance departments drink up. And it helps us to profile and target our customers in more detail than ever before.

For example, data from a direct response campaign could tell us that Jack, age 32, from Heaton Moor, clicked on a Facebook ad during his lunch break last Thursday and bought a pair of green swimming trunks for £15.99.

Great. But what happens when a direct response campaign goes toe-to-toe with a competitor with a stronger brand?

Imagine if Jack was presented with the choice of two pairs of green swimmers for roughly the same price. One is a pair from a unknown brand and the other from Quicksilver. Which does he buy?

Ok, so what if the green trunks were up against another equally unknown brand?

In this case, the choice becomes less about the product itself and more about price, or delivery or reviews.

Leading a campaign on rational benefits brings results in the short-term. This is why direct response works. However, once your competitors catch up and can match your offering, the squeeze on margins can quickly become a chokehold. And no brand wants to be in a race to the bottom.

Do you have to choose?  Well, no actually, you don’t.

Most of a brand’s sales come from occasional shoppers, not die-hard fans. Success isn’t built on long-term brand loyalty but awareness – being front of mind when the time is right to buy. That’s why, as Martin Weigel, head planner at W&K Amsterdam puts it, “Our task is not nurturing enthusiasm but overcoming indifference.”

Creative brand campaigns are one way of overcoming indifference.

Intelligent targeting is another.

Can you successfully do the two things at the same time?

Brand Response is an approach that aims to balance both the books and the brand. In essence, it’s a creative activation campaign. It’s targeted and drives response whilst building the brand through creative execution.

Too clever by three quarters

For a real life example, take The Economist’s brand response campaign from a couple of years ago.

It did two things very well:

At one point in the 90s, The Economist was the undisputed king of the quip. They sold intellectualism. And we bought it.

Fast forward twenty years or so and The Economist’s lightbulb had all but flickered out. They had a perception problem. And a readership problem. Amongst young people in particular, they were seen as dry, stuffy, too highbrow. No longer relevant.

What was the key to changing that perception? Simple. Get people to read their articles.

They did this by targeting their audience very tightly. They profiled the places where their targets grazed online. They pushed out a combination of in feed and dynamic advertising that was built and served in real time. Basically, The Economist was making relevant commentary on relevant issues to an already engaged audience.

Most importantly, they did it in a way you’d expect from The Economist. Understated, poignant and devilishly clever. Great stuff. 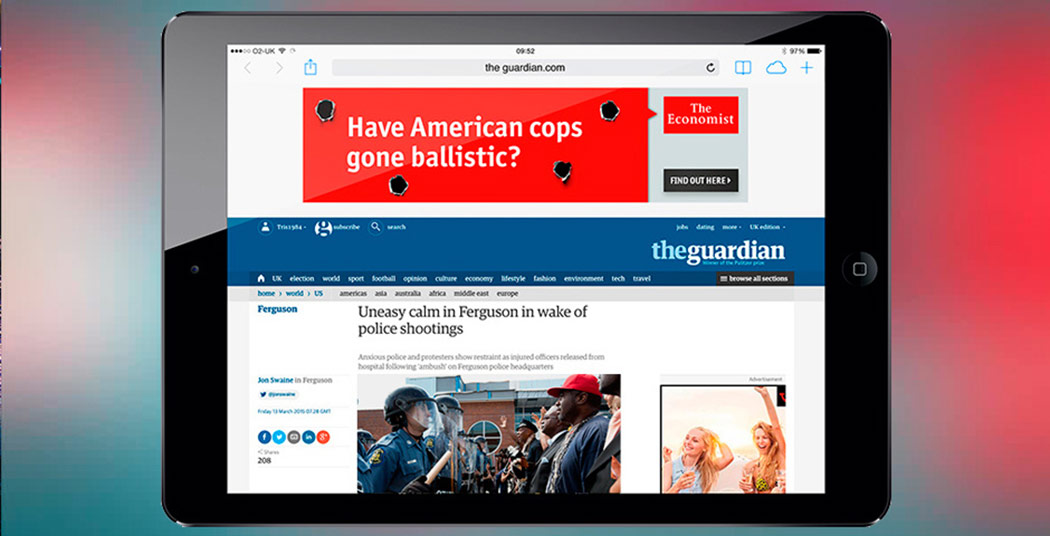 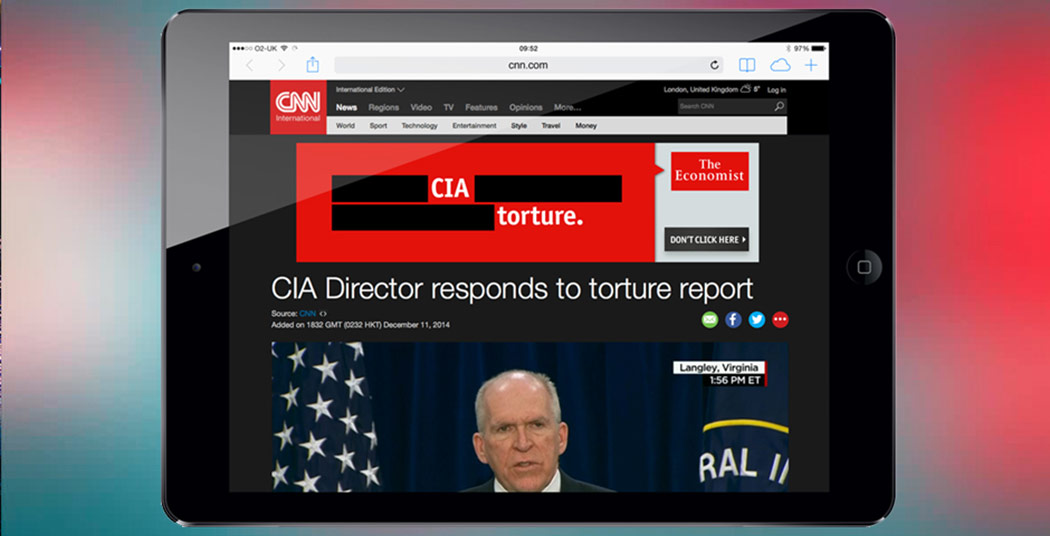 And it delivered. More than that. It smashed all targets. The campaign hit 50% of its target in just 9 days. In 5 weeks, they’d doubled it. In total, they got over 3,617,000 new people to take action, sample their content, and become re-targetable contacts. But the real numbers to get excited about were the new subscriptions: 9,500 new readers signed up. Worth an estimated £12m in lifetime value.

A creative brand campaign that delivers a response.

It might not end the battle for the marketing budget… But it could mean we can call a truce.

If you’re interested in finding out more about brand response, give us a call on 0161 831 0831 and ask for Nicola or get in touch at hello@dinosaur.co.uk.

Newsletter:
Get great articles like this in your inbox
Related News
Are algorithms destroying brands?
Goodbye to the gaffes
Related Work
The Gym Group
The Gym Group
%%ARTICLECAT%%    %%ARTICLEDATE%%