Plant power and the silence of the brands

How can food, retail and FMCG brands profit from the vegan surge?

With Dinosaur’s long heritage in food, retail, health and FMCG communications, we’ve been keeping an eye on this trend for a while now. And this is a big new market. One that offers both opportunities and risks for brands. So, if you are wondering how to adapt to it, we’ve put together this overview of what’s going on and how your brand can profitably respond.

So how did veganism rebrand itself?

The staggering growth of veganism is all the more amazing because until recently, it had a real image problem, dominated by clichéd tropes of earnest animal activists who’d bend your ear at parties with tales of dark, gothic horror in the meat industry.

The Guardian’s analysis points to three factors driving this growth: environmentalism, animal welfare and health concerns. That’s simplistic. Granted, films like ‘Cowspiracy’ or ‘Supersize Me’ have undoubtedly had an impact, but they’re nothing new. Animal rights activists have been telling us the same stuff for decades.

Truth is, fear and loathing are poor motivators for change: we try to avoid news that makes us feel bad, especially if the remedy involves hard work (rebuilding our entire diet) and giving up something we love (meat, cheese, butter etc). By contrast, positive information makes us feel good, so we seek it out.

This being true, we need to find a huge source of positive portrayals of veganism to account for this trend.

Take a look at the 63m results you get for #vegan on Instagram and a wonderland of gorgeous, sexy, food-porn is revealed. Here’s just a couple, picked more or less at random.

Instagram is the perfect channel to give lie to the ‘tasteless rabbit food’ image that traditionally put so many off a vegan diet. And there’s another factor here: people posting about veganism tend to be 18-34, predominantly female and image conscious; women with an eye for a killer selfie. Bluntly, if it’s a stylish and aspirational image you are after then they are probably better evangelists for your movement than the chunky middle-aged men who post about meat.

And then there’s the celebs. The stars. The high-status, high-rollers. Check out this Glamour magazine article on “Celebrity vegans who make eating more veg look seriously sexy.” It’s a full-on A-list that includes Brad Pitt, Beyoncé, Jay-Z, Ariana Grande, J-Lo, Anne Hathaway and even old-school heroes like Stevie Wonder. This is important because, as a social species, we pay disproportionate attention to high status individuals and seek to emulate them.

Finally, vegan-curious ‘flexitarians’ keen to reduce their meat intake without giving it up entirely have been well-served by initiatives like Veganuary and Meat Free Monday. It lets people ‘try before they buy’. Curious consumers now have a low-commitment way to try out a meat-free diet. And in the case of Veganuary, you get supported with recipes, tips, tricks and encouragement to succeed.

All these factors flip traditional perceptions of veganism on their head. It’s not about berating you for being morally lacking, it’s offering you sexiness, status and great menu options. Suddenly, it becomes a very compelling proposition: what’s not to like?

Is this just a fad?

Our analysis suggests not: this is a lasting trend built on strong roots. Fads tend to come from nowhere, spike and then die off. Here’s an example:

By contrast, the rise in veganism has been a long, slow burn. And it’s now capitalising on its strong foundations. “Vegan” overtook “vegetarian” in the trend data way back in 2015 and now even rivals industry heavyweights like “McDonald’s”. Digging into the thicket of Instagram accounts, YouTube channels and subReddits on the subject reinforces this impression of grassroots growth driven by passionate advocates. So, this looks like a tipping point into mainstream culture rather than the breaking wave of a fad.

This is an underserved segment. Just one example highlights the untapped potential.

Veganuary is an annual outreach initiative, a bit like Movember, designed to get people to try veganism. This year’s advertising campaign cost a modest £82,000, raised by crowdfunding. And it attracted over 168,000 sign-ups. That gives a cost per action (CPA) of under 50p. Compare that to typical Google PPC and display ad CPA’s and you can see just how good: average CPA is around 100x as high!

True, the official Veganuary site benefitted from a lot of free marketing from the food and restaurant sectors. For example, Veganuary promotions by our client, The Corn Exchange, helped boost revenues during January, a traditionally quiet time.

Even so, the size of the marketing opportunity is clear.

The silence of the brands

Put like that, it’s surprising how few brands are talking about this. Sixty percent of sign-ups to Veganuary this year were under 30 and came predominantly from ABC1 socioeconomic groups. This a highly attractive demographic to many brands. They are young, hip, targetable, active on social media and in an underserved high-growth market. A marketer’s dream, right? Not quite.

This is a sceptical audience that understands PR tactics and despises ‘greenwashing’. Despite its recent image makeover, this remains a values-driven trend underpinned by environmental concerns and social responsibility. Even brands with unquestionably pure intentions can fall foul of the strict standards some demand.

See this thread of responses to a post from Oatly, makers of a non-dairy vegan alternative to milk. For supplying the residue from their production process to a pig farm (even one they were helping to convert away from animal production), they lost customers and credibility.

Any expression of a ‘brand purpose’ is likely to be scrutinised very carefully by sophisticated consumers experienced in researching and sharing brands’ ownership, ethos, supply chains and history.

Marks and Spencer discovered this to their cost when they tried to sell ‘Cauliflower Steaks’ (slices of cauliflower) shrink-wrapped in single-use plastic for £2 a pop. Cue hoots of derision and widespread national coverage. It takes 18 months to bring a product to market and one day for social media to destroy it. There’s real brand risk here.

In short, don’t try and do the “Purpose-driven marketing” thing unless your brand has equity, history and authenticity in this space. It won’t wash and your brand will suffer.

So, how are brands responding?

Many mass-market brands like Sainsbury’s, Asda, our own long-standing client The Co-op and restaurant chains have been quietly rounding out their vegan offerings (yes, even McDonald’s). But, after seeing what happened to M&S, many seem to have decided that discretion is the better part of valour.

Disappointingly, industry stalwarts like @alpro (148k followers) and @lindamccartneyfoods (52k followers) are mere tiddlers on Instagram. Compare that with arch-enemy @mcdonald’s (3.2m followers) and the scale of the industry’s challenge is obvious.

But there are bolder spirits out there, and when they get it right, they’re making out like bandits.

Pret has prospered, even while continuing to sell meat. It avoided the missteps that others have made by making a habit of testing and crowdsourcing its ideas. And Pret hit the jackpot with both its veggie pop-up shops and its ‘not just for veggies’ range. By making its offering inclusive and welcoming with witty and stylish campaigns, the company has used this trend to establish an advantage over rivals in a highly competitive sector. Non-dairy and meat-free options are behind much of its recent growth. 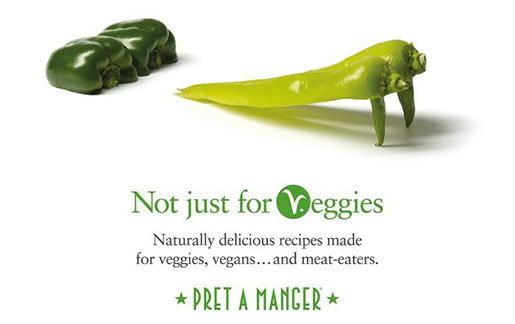 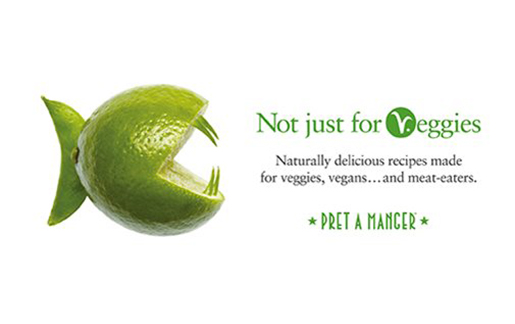 Listening to people in the target demographic, it rapidly became clear is that the grassroots heritage of this movement has resulted in the formation of extended networks of trust where people follow people, not brands. So, Influencers should be a key part of your strategy. There’s a dense network of influencers and micro-influencers out there all primed to promote the right stuff. Just look at @bosh.tv (269k Insta followers), which recently helped Wagamama highlight its vegan menu.

This approach scales from the smallest to the largest brands. Accounts like @vegansofldn, @veganburd and @vegan_punks feature a wealth of reviews and product. Collaboration and promotional opportunities abound. This means that even tiny startups like @alphafoods are can get in on the act – they’re currently running a paid partnership with @bestofvegan (1.5m Insta followers).

The importance of not being earnest

Being witty, approachable, relatable and having an on-point social team can lead to big wins.

When a Facebook rant ending “Call it Gary or something, just don’t call it cheese because it’s not cheese!” went viral in 2016, the vegan community responded with jokes, memes and general hilarity. Sainsbury’s picked up on this and announced it was changing the name of its vegan cheese range to ‘Gary’. Which it then did. Sales soared and the crowd went wild.

Hats off. A stroke of tactical marketing genius.

The moral? Don’t be afraid to take a risk and do something funny. This may be a movement with a mission, but that doesn’t mean they‘re po-faced.

Pulling it all together

This is one of the most sophisticated demographics on earth: incredibly attuned to spin and BS, getting their information from non-traditional sources and sceptical of brand intentions. To appeal to them, your communications strategy has to be as sophisticated as they are.

But, the prize is worth having. It’s a slice of a fast-growing market heavily skewed towards young professionals with disposable income.

And if you happen to find any A-list celebrities lying around idle, don’t forget to snap them up.

If you want to use any of the key stats or information from this piece in your own presentations, we’ve created a handy slideshare summary. View and download it here: Slideshare of “Plant power and the silence of the brands”

Plant power and silence of the brands: the incredible growth of veganism and what it means for brands.