Queuing around the block

If two’s company, then 300’s a crowd. No doubt about it. That’s how many people queued up outside Bourton-on-the-Water’s new premium Midcounties Co-op store on its opening day last month.

Creating a buzz in Bourton

After the ribbon was cut, the doors slid open and the 300-strong crowd surged in store for the first time. Store launches can sometimes feel a little ‘style over substance’ (maybe to cover up the lack of real originality in the store’s offering), but this was anything but. People showed up in droves. And they stayed. And they spent.

So what went right? What was it about this store’s offering and our pre-launch marketing that created such a stir?

From Mosaic data to carefully-acquired local knowledge, we weren’t targeting your everyday supermarket shoppers. The audience for Midcounties are people who care deeply about the quality of their food and its provenance. The local farmers’ market is one of the best in the region, and this demographic shows a clear love of British produce – the closer to home, the better.

They have the incomes to afford it too. Slightly older and more traditional in their media consumption, this wasn’t the time or place for a Snapchat campaign. Knowledgeable foodies and proud locals, the way forward was clear: focus on the provenance and communicate the quality.

So we told them a story

In food marketing, you have to sell the sizzle as well as the sausage. Especially to an audience that demands “premium”. They want food with a backstory. Food they can tell their friends about. Food they can feel good about buying, cooking and, of course, eating.

But focusing on the produce itself would only take us so far.

So, instead, we told the story of when, why and how to get the best from every last free-range egg, bottle of beer and jar of honey. As told by those who know it best: the people who make it, grow it, pick it and supply it: the producers.

They spend their lives farming, baking, brewing and crafting in pursuit of the perfect produce. To communicate that, Midcounties Co-operative was positioned as the place to get the best food and drink – including knowledge and inspiration – direct from some of the finest artisan producers in the country. 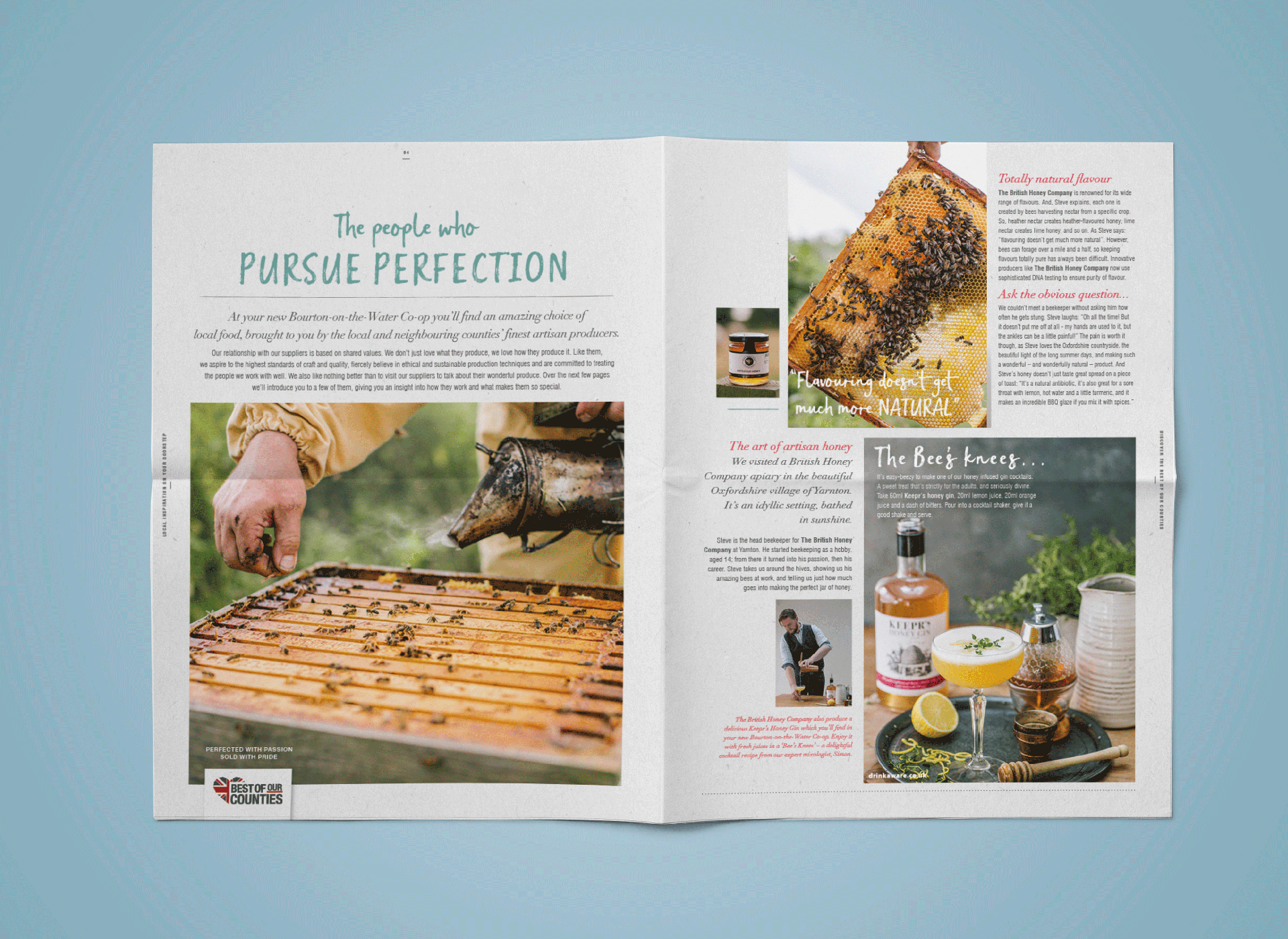 And we spread the word

Dinosaur created a stylish door-drop magazine to whet people’s appetites with commercial photographer Steven Landles. With vouchers to spend and recipes to inspire, the magazine would drive people in store to buy their ingredients, learn more about the suppliers, and get a little discount too (with vouchers targeted at both top-up and large shoppers).

Research from Marketreach told us that 92% of people read door-drops that are delivered to their home, with 67% being prompted to make a purchase. It’s a tactic that was used previously to great effect for the Midcounties Co-op, with one customer coming in, brandishing a copy of the magazine and demanding “I want everything on this page!” 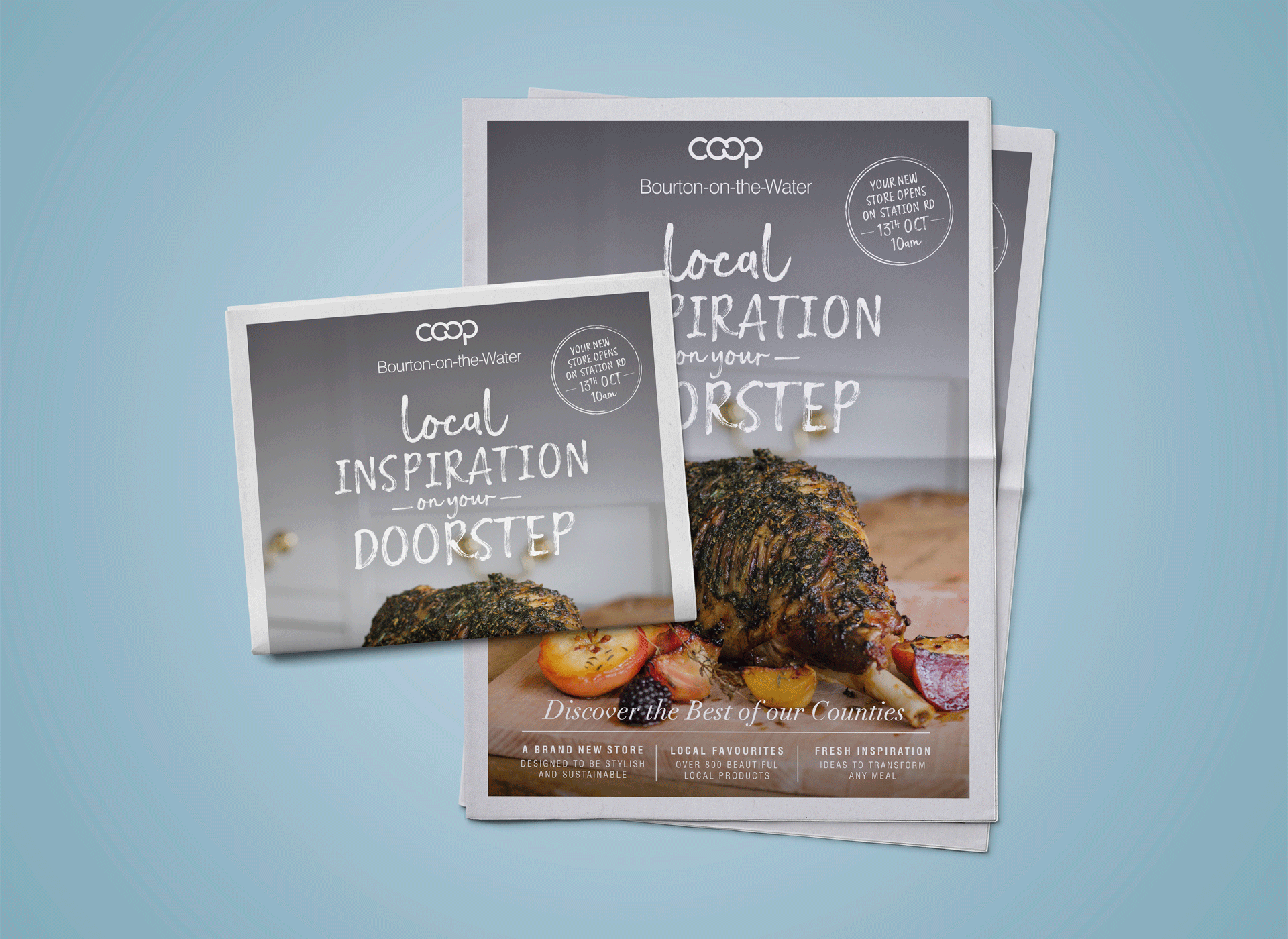 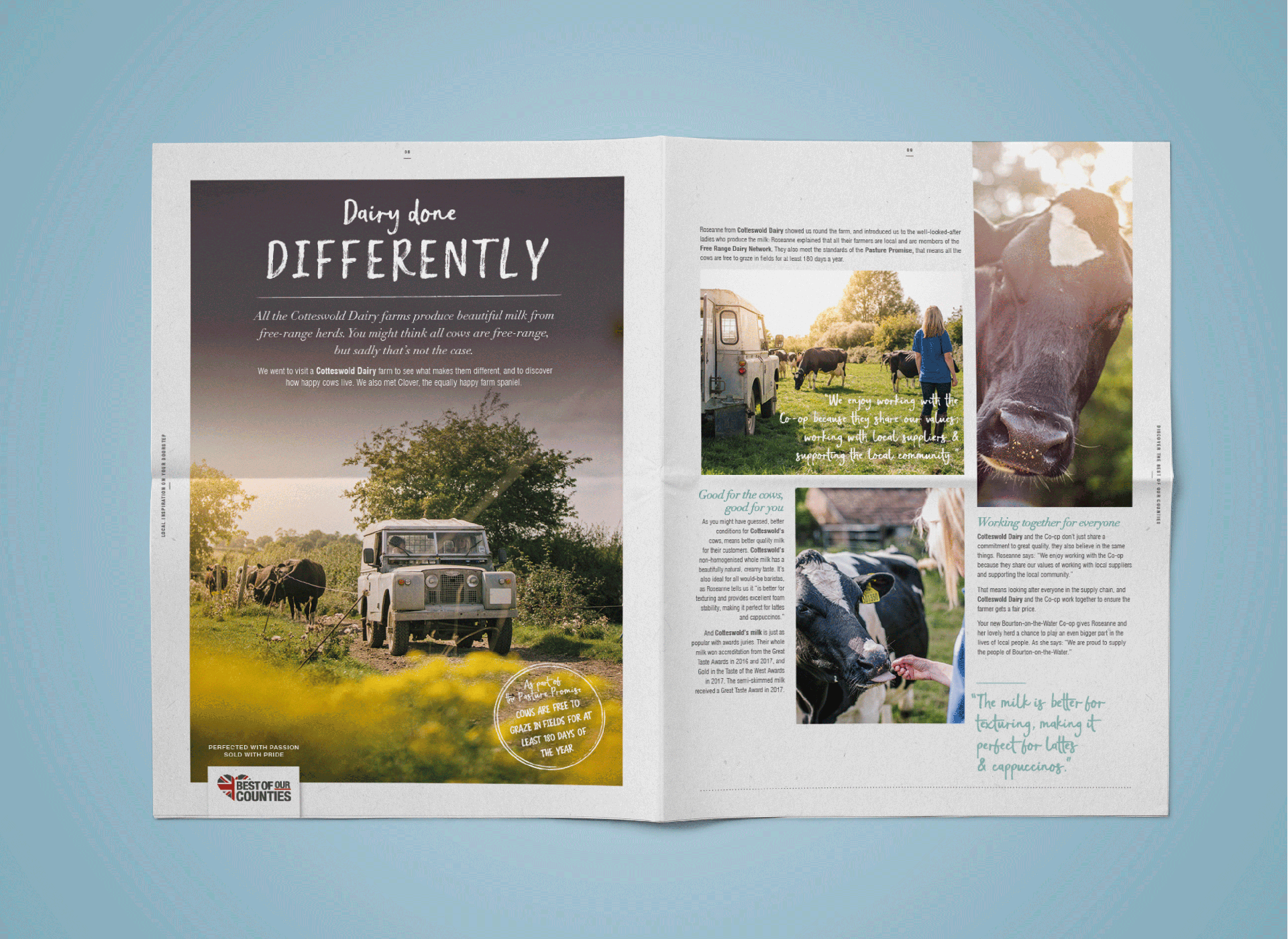 In-store, that customer journey continued. The messaging hierarchy was carefully mapped out, making sure people would see the right things at the right times at ‘high’, ‘eye’ and ‘buy’ levels. At every stage of the journey, our POS materials would tell supplier stories, give easy-to-shop-for recipes, and serve up inspiration for the foodies of the Cotswolds. 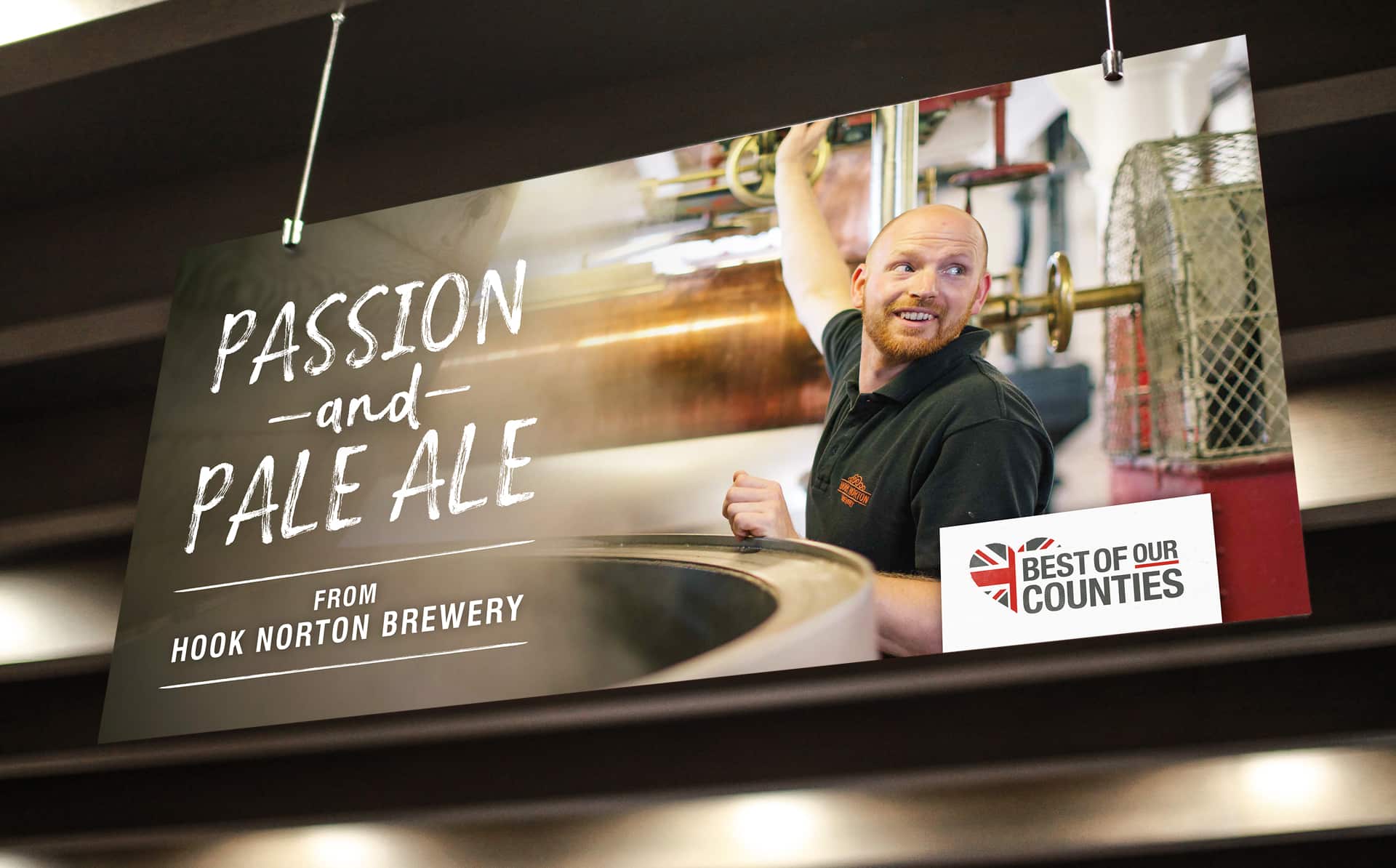 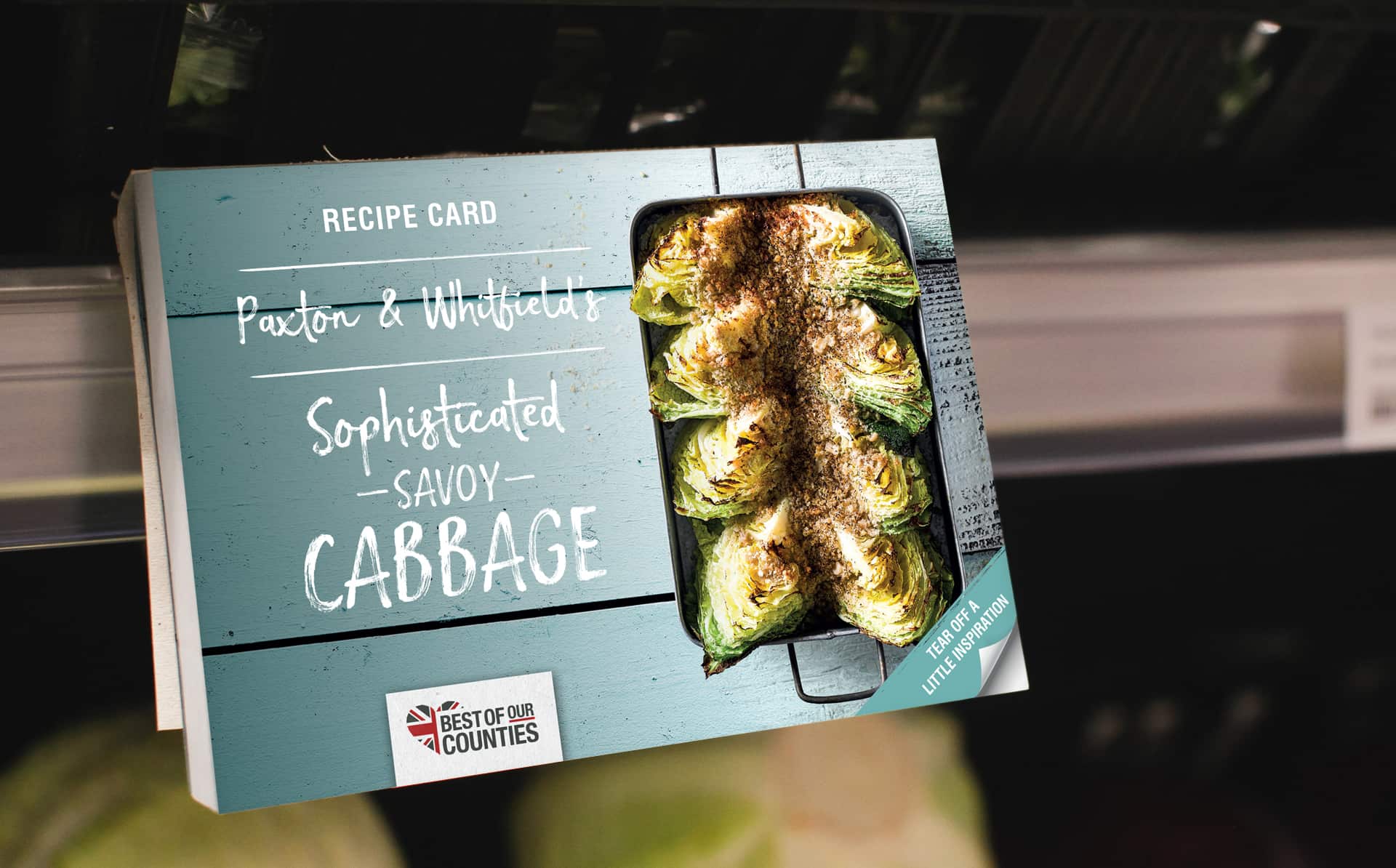 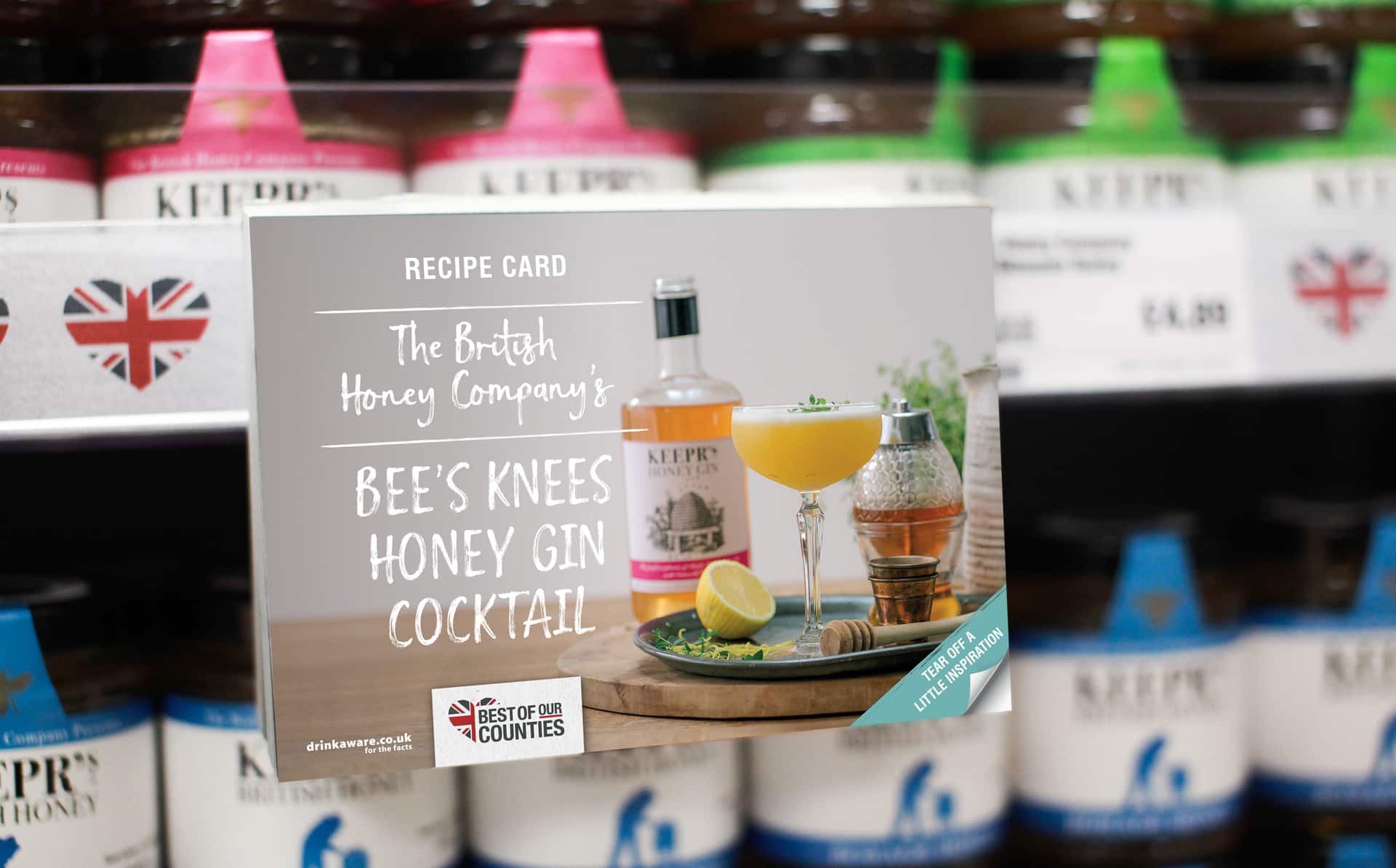 Newsletter:
Get great articles like this in your inbox
Related News
Take a #tasteadventure at the Corn Exchange
I want everything on this page!
Related Work
Co-op Food
Midcounties Co-operative
%%ARTICLECAT%%    %%ARTICLEDATE%%