Pick of the lions

A look at the work that caught Dino's eye at Cannes

The Cannes Festival of Creativity 2018 was back –  bigger, better and more streamlined than ever. A flash new format was introduced to reflect changes in the advertising landscape, with all content and awards divided into nine ‘tracks’: Reach, Communications, Craft, Experience, Innovation, Impact, Good, Entertainment and Health. As a result, three old Lions and 120 subcategories were retired, and five new Lions were welcomed into the pride.

So did the best work still shine? We think so. All the big hitters were there: Apple’s Welcome Home, Nike’s ‘Nothing Beats a Londoner’, Tide’s Superbowl pastiche – but the evolved format still left plenty of room for surprises.

Here are a few of our favourite entries you may not have seen.

I love it when a brand knows exactly who it is, what it stands for and isn’t afraid to shake things up.
This is what German supermarket EDEKA did with the help of Hamburg-based agency, Jung von Matt.

At the time, Trump was planning to build his Mexican wall.
A right-wing party was looking to consolidate a foothold in German parliament.
Diversity, immigration and xenophobia were global talking points.
They still are.

Against this backdrop, EDEKA wanted to drive home the importance of diversity in a way that everyone could understand. They did this by creating The Most German Supermarket.

For one day only, they removed all foreign-made products from its shelves. Over 20,000 in total.
And what does a German supermarket look like with German-only goods? Pretty empty.

I love the idea of confused shoppers turning up to their local store to find shelves, counters and freezers stripped bare. In their place were boards that said “On sale today, much less variety” and “We will be poorer without diversity.”

It’s disruption as its very best. Sharp and simple. Surprising and relevant.

When you show how an issue impacts the lives of individuals, they truly understand its relevancy to them. And what need is more basic than the food we buy at the supermarket?

As beautifully simple as the idea was, it was its timing that was the masterstroke. The Most German Supermarket opened its doors the week before the Federal Election took place in Germany. They chose their Hamburg store, a city where the immigration debate had reached fever-pitch.

What elevates this campaign is that it was an immersive, visceral experience. They couldn’t swipe it away, close it down or switch the channel. It was happening in their local supermarket. Those customers wandering through the empty aisles couldn’t fail to be moved emotionally, as the social response reflects. Online played its key role in ensuring it reached more than 150 million people.

Unfortunately, The Most German Supermarket doesn’t have a Titanium Lion on its shelves. Although it was provocative, envy-inspiring and boundary-busting, it didn’t quite define a new direction for an industry. But maybe, for a brand, some things are more important than awards?

Like adding so eloquently to a worldwide discussion about an issue that affects the future of us all. 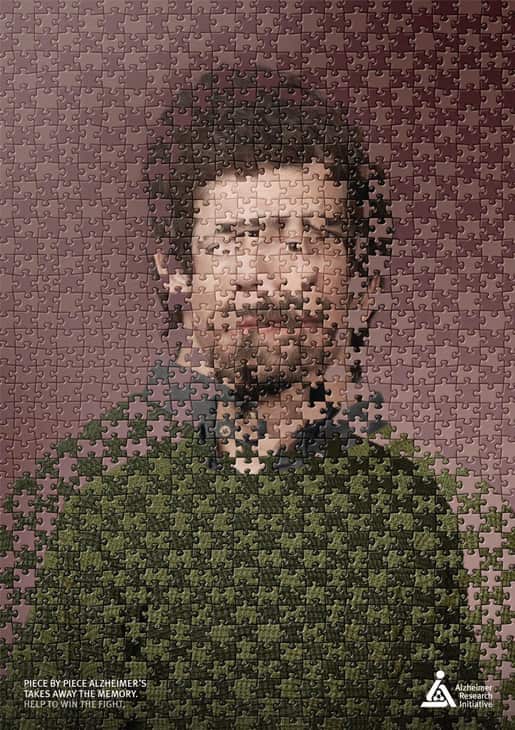 As Alzheimer’s progresses, a person’s ability to recognise familiar faces dwindles and their memory fails. It deeply affects their relationships with others and the world around them. Many feel frustrated, isolated and lonely. It’s heartbreakingly cruel.

Alzheimer’s Research Initiative is a charity who are working to fund a cure. To raise awareness, BBDO Group Germany developed a campaign that allows us to see and understand the disease through the eyes of an Alzheimer’s sufferer. The result is this impressive campaign of distorted family portrait ‘puzzles’.

It’s a common analogy but what makes this campaign extraordinary is the work’s craft and emotional intelligence.

By combining a simple, powerful idea with exceptional art direction, the work is elevated to an art form.  And it drives the message home.

The perfectly crafted jigsaw portraits were created by artist and photographer Alma Haser. The attention to detail is sublime. Two portraits taken from slightly different angles are merged, with the background blended in to break up the hard lines of the image. This creates a soft focus pixelated representation of the person.

The result is a striking representation of the devastating effects of the illness.

And you get it. Straight away.

We instantly understand how, for someone with Alzheimer’s their most cherished relationships become an unsolvable puzzle, made up of shuffled memories that fade away, piece by piece. 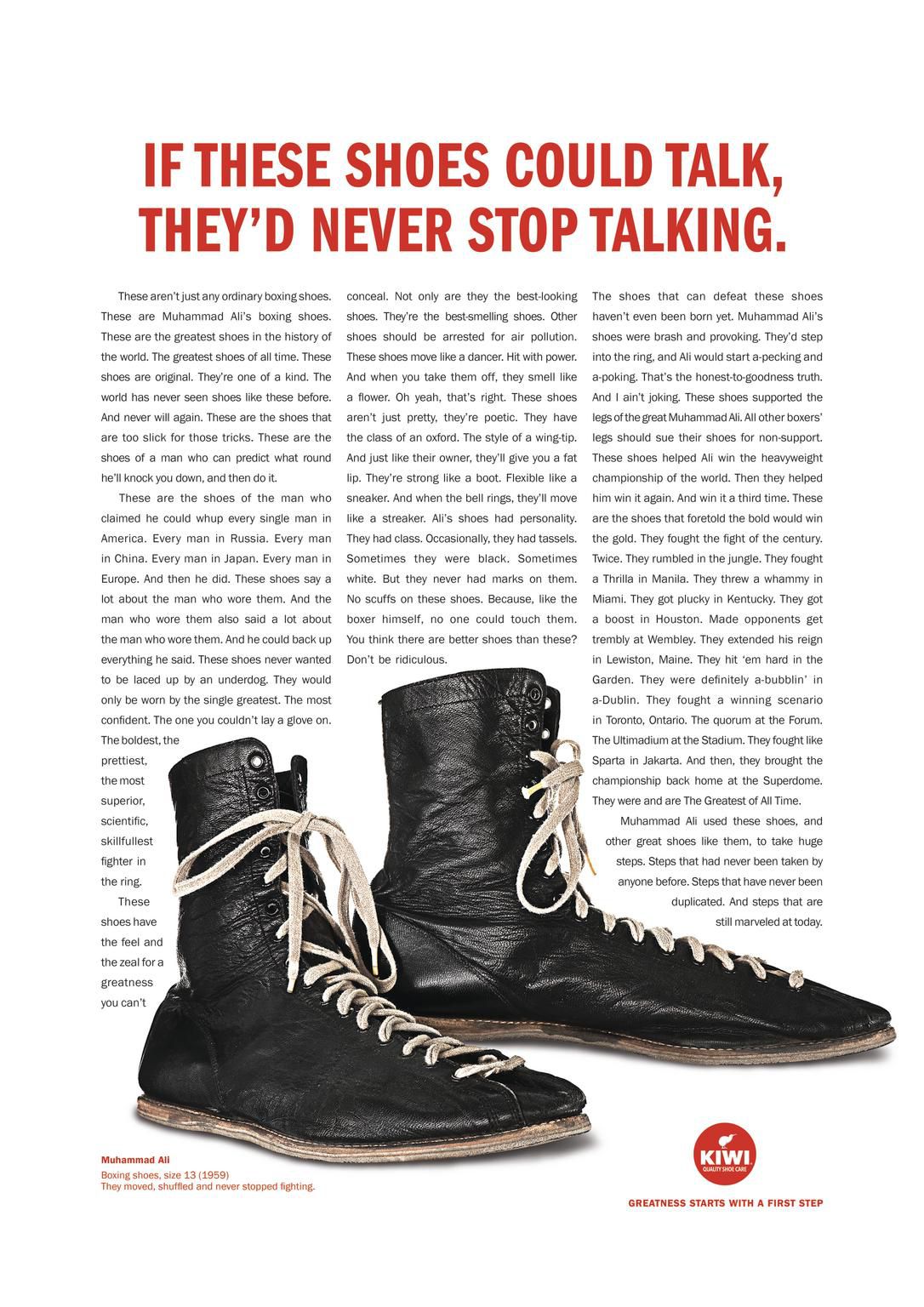 Now I enjoy a pithy headline just as much as the next wordsmith,  but I’m a sucker for an old-school long copy ad. It’s the difference between nibbling tapas or gorging myself on a three course dinner. And this campaign for Kiwi by Ogilvy Chicago is a feast, complete with hot buttered rolls at the start and a choccie with your coffee at the end.

Yes, it’s an ad about a pair of shoes. Written for a company that sells shoe polish.

It’s a copywriting tour de force in tribute to one of the greatest heroes of American culture.

The way it recreates Ali’s razor sharp wit, his rhyme and rhythm is an absolute joy. It trash-talks without being trashy. Brags with a twinkle in its eye. Delivers wise-cracks with the quick-fire patter of a pro. And like the man himself, has you punch drunk by the end.

You can almost hear Ali talking to you:  “These shoes have the feel and zeal for greatness you can’t conceal. Not only are they the best-looking shoes. They’re the best smelling shoes. Other shoes should be arrested for air pollution.”

The irony that this ad achieved such cut-through is not lost here. Long copy ads are seen by many as obsolete in a digital age where brevity is best.  They are now the exception, not the rule.

But that can be a very powerful thing.

A total of four copywriters worked on this campaign. And if I was going to make any criticism, it would be that across the full series (Ali, Hemingway, Earhart and Lincoln), the copy does feel a little overworked in places.

So which one was the greatest.

Who canned it at Cannes?  Made them dance in France.  Left them wanting more on the Cote d’Azur.

The others were happy with silver. But it was Ali’s shoes that strutted off with the Grand Prix.

The Faroe Islands. A handful of rocks poking up from the Atlantic, somewhere between Denmark and Iceland. It’s populated by around 50,000 people reliant on fishing and tourism for their survival. They speak Faroese. And when Google Translate decided it was too obscure a language to include in its services, the Faroe Islands took matters into their own hands.

Enter ‘Faroe Islands Translate’,  a live video translate tool. Simply type in your phrase and a random Faroese volunteer switches on their phone camera and translates it for you. That’s it.

Somehow, it just worked. Over a million translations later, with over 40% of the islands’ population chipping in to help out, and reaching over a billion people: yes, it definitely worked. Not bad for a project with £0 media budget.

But why was it successful?

I guess it taps into our need to discover, to connect with others. There’s a strangely charming novelty about it: catching a glimpse of a world you never even knew existed.

At its worst, social media imprisons you in an echo-chamber. At its best, it connects you just for a moment with people who do things differently, and does so with grace, wit and charm.

It made me smile. And check the price of flights.

The Creative Effectiveness Lion celebrates the measurable impact of creativity over the long term. It’s the area that as Client Services Director, I am most interested in, as I’m sure many clients are too.

The campaigns that pick up a Creative Effectiveness Lion have to demonstrate the best of both worlds. Supreme craft and business/cultural impact.

Fearless Girl is one of those.

Sometimes it takes a bold statement to get your message heard. And sometimes that bold statement comes in the form of a small girl facing off a raging bull.

You could say that Fearless Girl was about equality.

But it was also about the bottom line.

Research from MSCI had revealed that companies with higher percentages of women in leadership roles outperform those that don’t.

What can we draw from that? Simply, that having women in leadership positions is good for business.

To prove this, State Street Global Advisors developed SHE, an performance tracker for companies with greater percentage of women in leadership positions.

This is what Fearless Girl was there to draw attention to. That your business will be more effective if women are in senior roles.

And as she was positioned right on Wall Street on the eve of International Women’s day, Fearless Girl was hard to ignore.

Just as the evidence from the SHE performance tracker is.

Her defiant stance with her hands on hips was designed to represent the power and potential of women in the face of male corporate dominance.

It turned up the volume on a global discussion about pay inequality. It rippled across the globe.

In France, female workers from all sectors walked out in protest at the gender pay gap. Protests took place worldwide. Companies, corporations and governments were asked to publish their payroll details and account for discrepancies. Even Hollywood got involved in gender equality with #metoo.

Good creative that is relevant to our times moves us. That’s what Fearless Girl did. It lit the touch-paper on a wider issue.

This time she was not going to be silenced.

She might be a little girl, but she’s got big balls.

To see Dinosaur’s work in the FMCG, food, retail, health and wellness sectors, click here for case studies on how we’ve helped The Co-op, Atkins, Midcounties Co-op, Wagamama and many more.