If you want your brand to make a tonne of cold, hard cash, invest in creative advertising. This shouldn’t be a controversial statement and isn’t what this piece is about, but once you can prove it beyond doubt, discovering the blueprints for an unstoppable brand machine suddenly becomes more important. So, let’s quickly prove the point.

The blueprint for brand growth

There is a blueprint for building great brands.

It’s created and sustained the world’s most profitable brands.

And, even in the face of digital, programmatic and AI-powered disruption, it remains fundamentally unchanged. Like most “new and improved” formulations, it’s an upgraded version of what went before, not a reinvention, Technology has allowed us to refine and finesse the blueprint. So, here are the three simple components of a great brand-building machine.

The targeting tools we have now are jaw-dropping. You can reach the right people, all day, every day. Given this technology, marketing effectiveness should be skyrocketing, but it’s falling. Clearly, most marketing messages are simply being ignored.

Because they don’t speak our language.

If you are really, truly, viscerally in tune with your customer: what they feel, what they want, what they need, then what you say won’t feel like an ad.

This has incredible power to short-circuit our rational, critical faculties. Objectivity flies out of the window, ‘gut feeling’ takes over, and we’ve established your brand as ‘one of us’ in the mind of the customer.

The brand is so in tune with how its core 18-30 year-old customers talk, feel and think that just one word earned them over 10,000 likes. And it’s not even their most successful effort. By upping the word count to three, they racked up a million likes and scored the most liked brand tweet of all time.

What it’s really saying is: here’s a joke that you’ll only get if you are ‘one of us’. These are pure brand communications and they work by putting Burger King ‘front of mind’ when those people next fancy a burger.

By contrast, look at HSBC’s recent ‘We are…’ campaign. It was visually distinctive and its executions were well-researched and sophisticated, targeting both local and interest-based demographics. It probably looked amazing in the pitch deck.

Problem is, it didn’t connect emotionally. If this was a brand campaign designed to make us feel something positive about HSBC, then it failed. It felt exactly like what it was: a remote international bank trying, and failing, to connect itself with our local and national identities. And got exactly the response you would expect:

Why did HSBC fail where Burger King triumphed?

At the heart of this failure was a lack of emotional connection with the audience.

And that’s the point: targeting only gets you so far. Great creatives then take that demographic targeting data and use it to viscerally understand the customer so they can create brand adverts that hit the right emotional notes.

This emotional relevance earns you the right to talk to the audience.

So, what are you going to say?

The world is crowded and noisy. Your brand just isn’t that important to most people. Getting them to remember just one good thing about it takes concerted and consistent effort, which makes it vital to pick that one thing with care.

Encapsulating what makes you special in five words or less is hard, so be prepared to spend time and money working this out.

Be clear what it is.

Make sure it is true.

Understand how it aligns with your audiences’ emotional needs.

And make sure it will stand the test of time, because good creative platforms stick around.

BMW has been the ultimate driving machine since 1973, Marmite has been loved or hated since 1997, the same year in which Guinness first told us to hold our horses because it’s worth waiting for. And it’s not always a strapline. John Lewis may be never knowingly undersold, but its famous Christmas ads are all about a feeling: happiness, belonging, home and family. 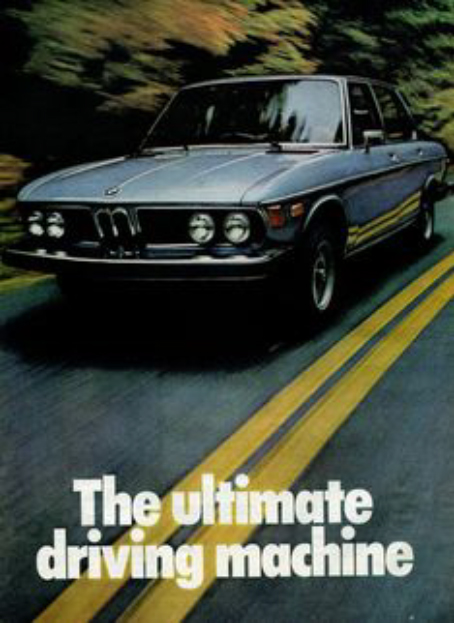 This shouldn’t be a surprise as it’s often said that a brand promise is a promise of total consistency. “A Coke is a Coke and no amount of money can get you a better Coke than the one the bum on the corner is drinking,” as Andy Warhol put it.

Similarly, all great brands have a consistent advertising formula. Some are obvious. Absolut’s is: iconic bottle, imaginatively reworked, conveying upmarket sophistication. Executions of fashionable places or concepts by famous designers and artists then bring this formula to life with wit and charm.

Not all formulas are that blatant, but all deliver one thing: emotional consistency.

People love formulas. The popularity of Netflix binging should be enough proof of that truth. Familiar, but different enough to engage our interest.

Completely new lands us in a strange world that takes a lot of mental effort to ‘get’ and fit it into our existing cognitive landscape. And endless repetition is boring. Creative use of a formula, by contrast, makes our brains light up with understanding, recognition and appreciation. We find it intensely emotionally satisfying because it’s all payoff for no mental effort.

And that’s also why the formula is changed about as often as Coke’s is; it’s a high-risk strategy. People hate emotional inconsistency. They want that payoff and react badly when they don’t get it.

If that sounds like a recipe for dull and, well, formulaic ads then just look at Levi’s for an object lesson in how a good formula sets creatives free to build powerful brand associations. Spanning 35 years, they all celebrate the irreverent free spirit of youth with great music in a sexy context (and an optional side order of Americana). Viewed side by side, the emotional consistency is remarkable despite the differences.

3. Know how to stand out

In an era where we buy millions of ad impressions for even the smallest campaign, getting people to notice your brand amid thousands of others is hard. The best way to do that is through distinctiveness.

Salience; the thing that stands out, has historically signalled danger or opportunity. Either way, worth paying attention to. So, humans are attracted to distinction and remember the distinct thing.

We are drawn to the distinct: the Von Rerstoff effect

Great creative achieves distinction through fear, love, humour, provocation, beautiful visuals and even sheer off-the-wall craziness. It pushes the envelope, reinvents, grabs attention, has an edge, defies convention, punctures pomposity and is prepared to offend a few people (as long as they aren’t part of your tribe).

What it doesn’t do is rational features and benefits. Well, not unless your product has an absolutely standout benefit that puts it in a totally different league from its competitors. But, that kind of product tends to sell itself.

For the rest of us: getting fame and provoking an emotional response with distinctive, creative, advertising is the most profitable way to get your brand to stick in people’s heads (see point 8: Fame! in this article).

Examples include Dove’s real beauty, the Old Spice man, the Dairy Milk Gorilla, John Lewis Christmas ads, Guinness’ horses and many other classics. They all prove the point. You already know them. They worked.

And keep at it

At first glance, the ever-increasing volume of competing ads in digital and social spaces threatens to make it harder than ever to sear your brand mark into the minds of consumers. But, with so much dull, rational advertising around, this situation is as much an opportunity as a threat. Because great creative advertising gets you noticed and remembered positively.

Of course, none of this is going to make people declare undying love for your brand. It does make them more likely to pick your brand over the competition next time they’re faced with the choice. Keep at it and the margin increases over time, adding up to very large business effects. That’s why Coke is 3x as expensive as generic cola, why people queue round the block for Yeezy’s and why Guinness is Guinness and not just another stout.

If your brand knows its customers, what it stands for and consistently communicates it with charismatic charm, then you’ll have created the ultimate brand machine.

To see some of our work in the FMCG, food, retail, health and wellness sectors, click here for case studies on how we’ve helped Pets at home, The Gym Group, Midcounties Co-op, Wagamama and many more.