Keeping track of the ever-growing pantheon of social media platforms is getting harder: who’s up, who’s down, in and out. And getting it wrong will see you wasting money chasing customers who don’t exist. So, we turned to good old-fashioned Top Trumps technology to help you raise your social media game.

Click a card, any card to jump straight to that entry, or just read on.

Facebook and YouTube rule the world. Hold these two cards in your hand and you’ve basically won. So, what can we tell you about brand-building on these platforms that you don’t already know? 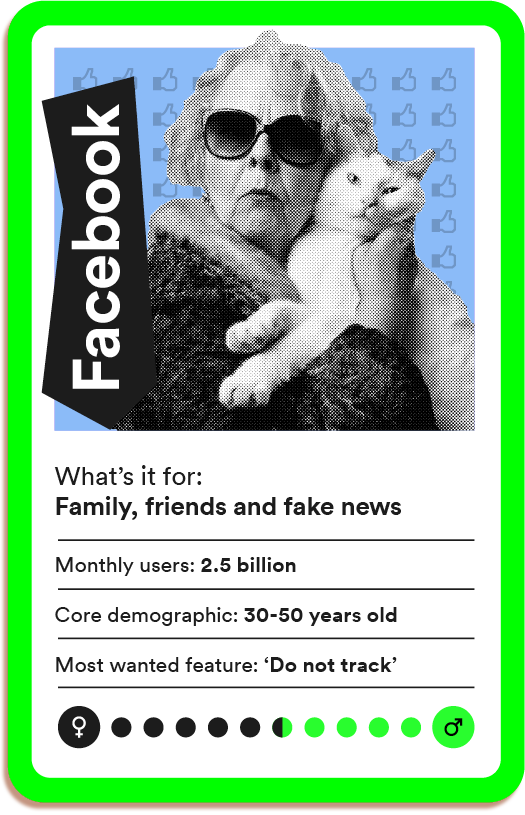 Some say Facebook is so big that it’s the only social network you can see from space. All we know is that Facebook, Instagram, WhatsApp and Messenger now reach over 4bn people a month. And we go where the audience is. So, despite the current boycotts and ongoing content issues, it remains the first port of call for most social advertisers. 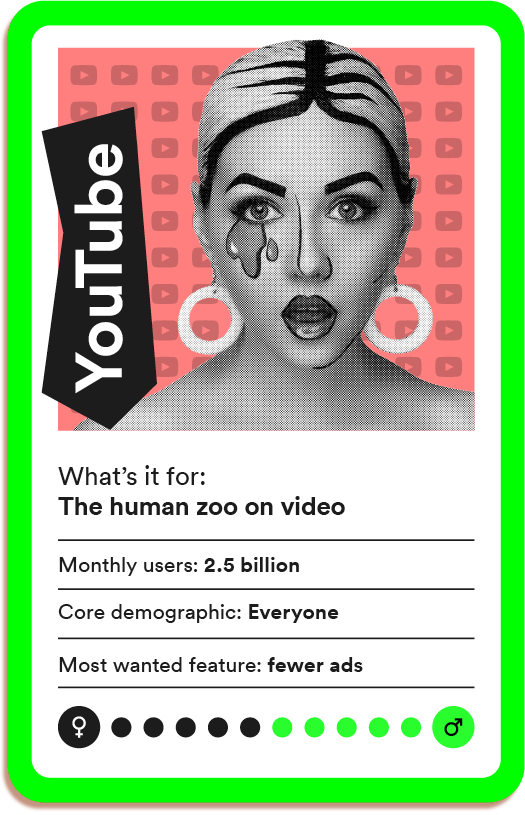 As a comms agency, we hate to admit that there’s such a thing as too many ads, but we did recently watch an 11-minute video with four separate ad breaks. And nearly went mad in consequence. Target with care to avoid being lost in all the noise.

YouTube is also the natural home of product explainers and demonstrations especially if you have a complicated product or one with lots of possible uses.

Grab a big bucket of popcorn, pull up a comfy chair and settle in to watch, because this is going to be an epic battle. This fight has everything, from cat videos to geopolitics. They’ll probably make a Netflix series about it one day. 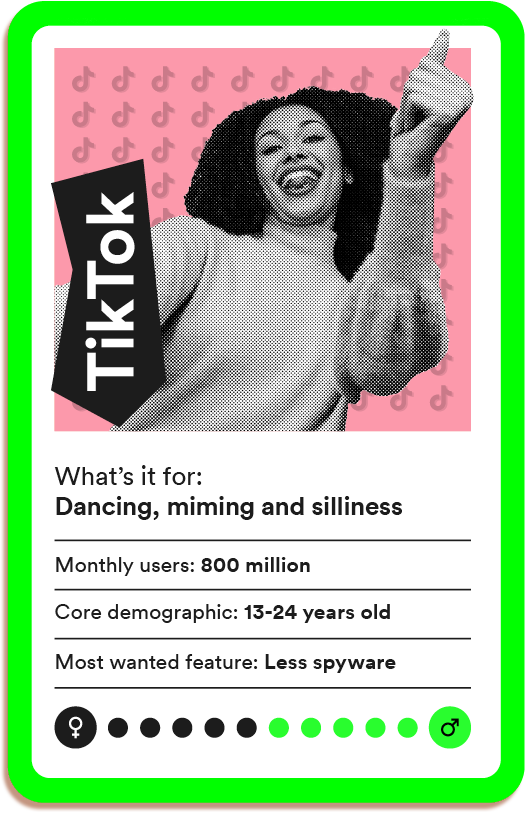 New kid on the block, TikTok, has doubled its userbase in 2020, topping download charts across the world as people rushed to get their hands on it. Fast, fun video of people doing silly things, often in time to music, turns out to be what the Internet is really for.

But there are problems. That very success brings it into direct competition with the Facebook empire! (cue Star Wars imperial march)

You may remember Snapchat. It learned the hard way just how harsh the social media playground can be when the big boys start throwing their weight around. Instagram copied its homework, nicked its lunch money and left it crying in the corner. Instagram’s Reels feature, that duplicates many TikTok features, is just the start of its fightback.

Apart from that, TikTok is also politically vulnerable. It sends a lot of personal data off to China, so Bytedance (TikTok’s Chinese owner) is prey to many of the same trust issues that plague Huawei. And the criticisms are largely fair: data collection is aggressive and surreptitious, leading to it being removed from app stores in India and put under 90 day’s notice to sell US operations to a US company or face a ban in the States.

Finally, this is still not a mature platform. Yes, it does offer self-serve advertising tools, but they have only been in place since January, so lack sophistication. There also isn’t an API which means there is no way to manage your TikTok channel using tools like Hootsuite. 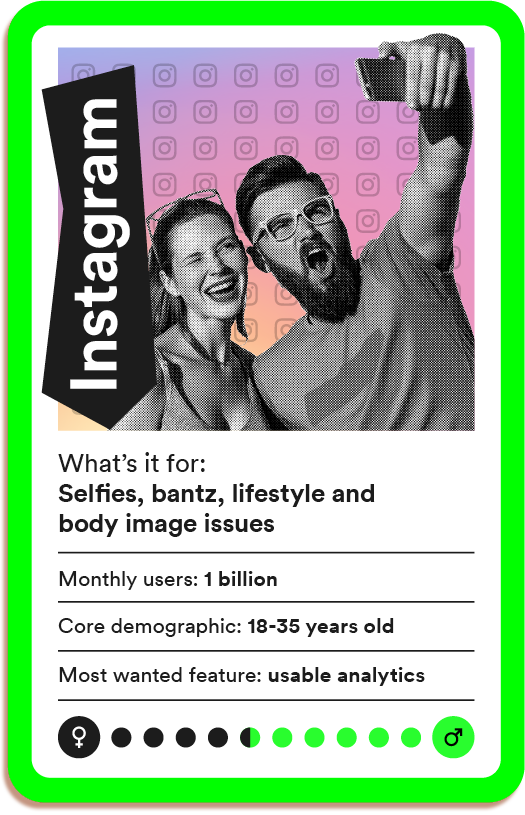 Instagram’s first move to counter TikTok’s success is to upgrade stories (the feature Instagram copied from Snapchat) and call it ‘Reels’. It will become a lot more focal, eclipsing the news-feed, making Instagram even more video-based.

Along the way, it would be nice if good organic analytics could be made available outside the app. And if they were made useable at the same time, that would just fab.

The middle-ranking social networks each have their strengths and weaknesses from a brand-building viewpoint. So, when should you use them? 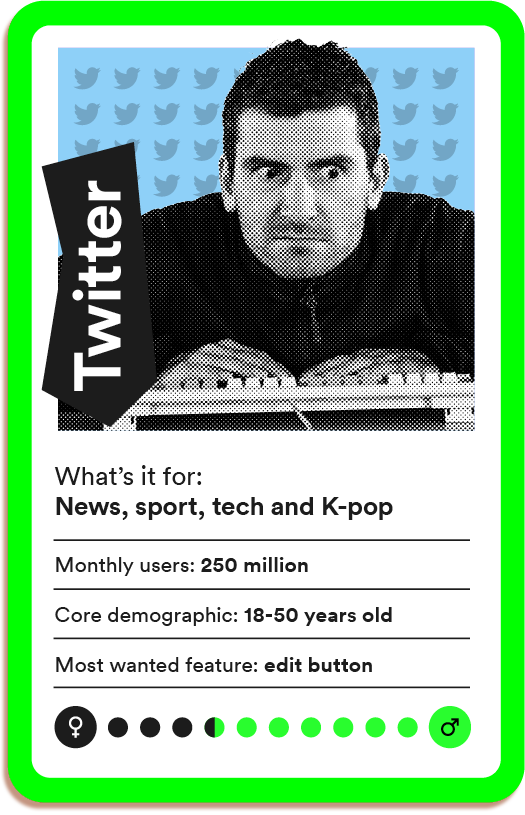 In terms of fame, Twitter really punches above its weight. In terms of monthly users, it’s no larger than Snapchat, which many now consider irrelevant. This is mainly because of its importance as an instant reaction channel for news and sport, and of course Donald Trump. It’s fascinating to see the transition between news Twitter during the week and sports Twitter at the weekend. All the trends change overnight. 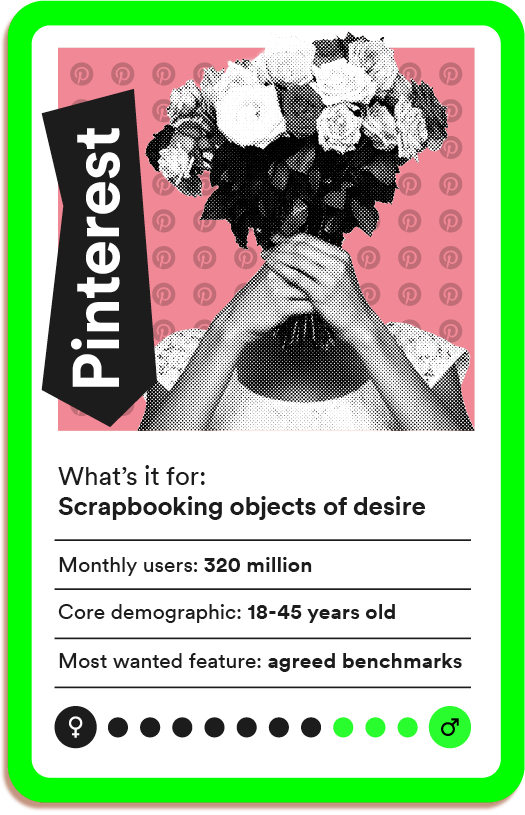 This is the social platform on which where users are most likely to welcome brand activity, because many of its users are actively planning purchases. The clichéd use of Pinterest is planning a wedding or a kitchen refit. Fashion, the arts, lifestyle and similar topics are all strongly represented.

Pinterest is also very brand safe. A haven of positivity in a contentious world. We’ve yet to see any hate speech since starting to use it in earnest and adult content is largely banned. Pinterest has also managed to steer clear of a lot of the controversy that surrounds other networks.

On the downside, it’s difficult to be sure how to measure and value engagement. The analytics tools are good, but there’s no real agreed sense of what constitutes ‘good’. 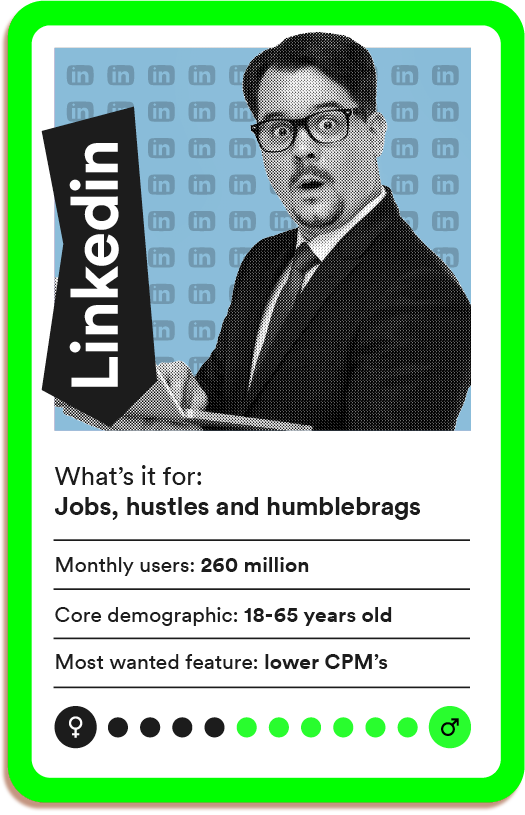 LinkedIn is the network everyone loves to hate. Full of humblebraggers, tone police and exhortations to work 28 hours a day, it’s somehow still so useful that we’re all on there. But then, it has no real competitors. It’s got the space to itself. If it had competition, ad costs would be lower and the user experience wouldn’t be so dreadful.

On the advertising side, its full-funnel marketing tools for retargeting and lookalike audiences are primitive. LinkedIn’s saving grace for advertisers is that the conventional targeting tools are so good this hardly matters.

The wildcards – networks for niches

These platforms may be outside the mainstream, but they can be surprisingly useful. 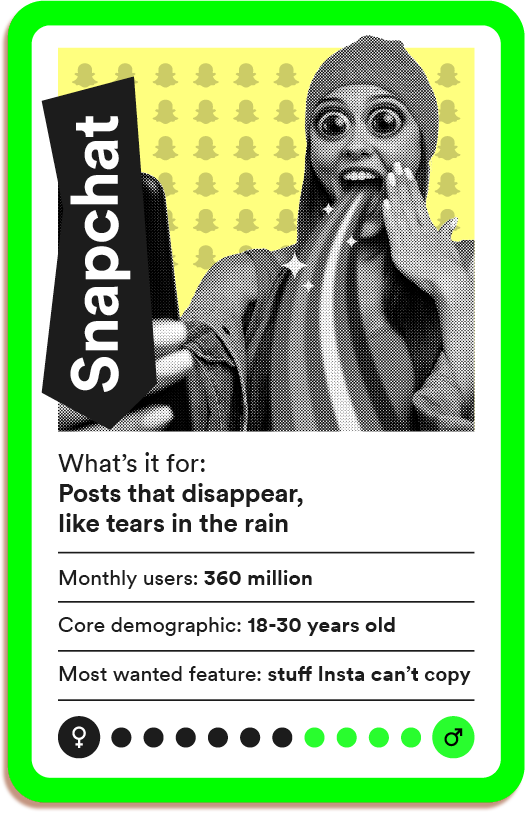 Originally popular with teenagers for posts that disappear after viewing, its initial popularity was driven by its ‘Parent-proof’ nature. After a dodgy start it grew-up fast, becoming more respectable and transforming into a place for teenagers generally, with cool AR filters, stories and weird sunglasses.

Then in 2016, Instagram decided to ‘be inspired by’ all of Snapchat’s cool features including stories and AR. Since then, it’s been ‘so, like, last decade, darling’. In fact, we hadn’t opened Snapchat in over a year before writing this piece. But it still has more monthly users than Twitter, Pinterest or LinkedIn. Not bad for a ‘failed’ platform. 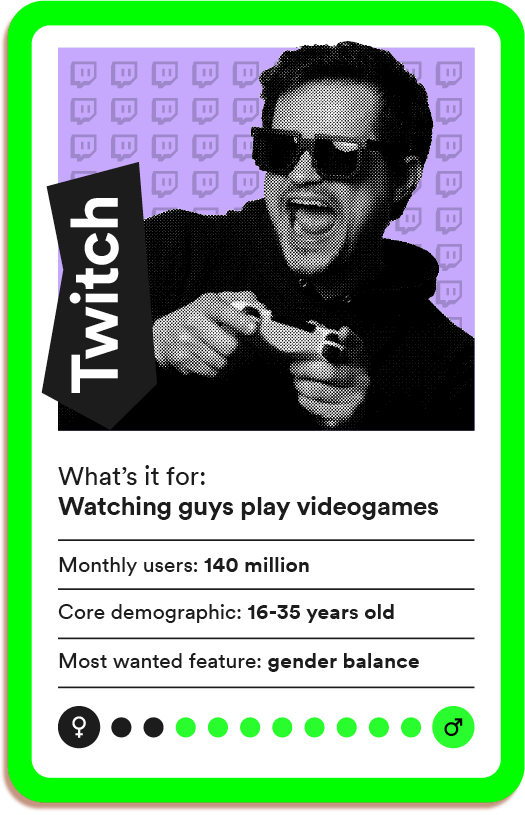 Watching other people play videogames is one of those things that seems incomprehensible to many, but it’s huge: try to think of Twitch as YouTube for gamers. And, of course, lockdown has sent the userbase skyrocketing.

The games industry dwarfs Hollywood, and with that rise have come superstar eSports players who earn millions in tournament and sponsorship fees each year. Those eSports players are, of course, influencers in their own right.

This is a very male-dominated space. So, it’s an effective place to advertise the kind of things that appeal to young men at the geekier end of the spectrum. At risk of sounding cliched, that means all the things we associate with young men: technology, games, sport, fashion and fast food.

On the downside, being in an environment so heavily dominated by young men comes with issues: female players often feel they can’t reveal that they are women because it can become a quickly become a hostile space. Since we’re aware of several female gamers who pass as male on Twitch, this is plainly an issue. 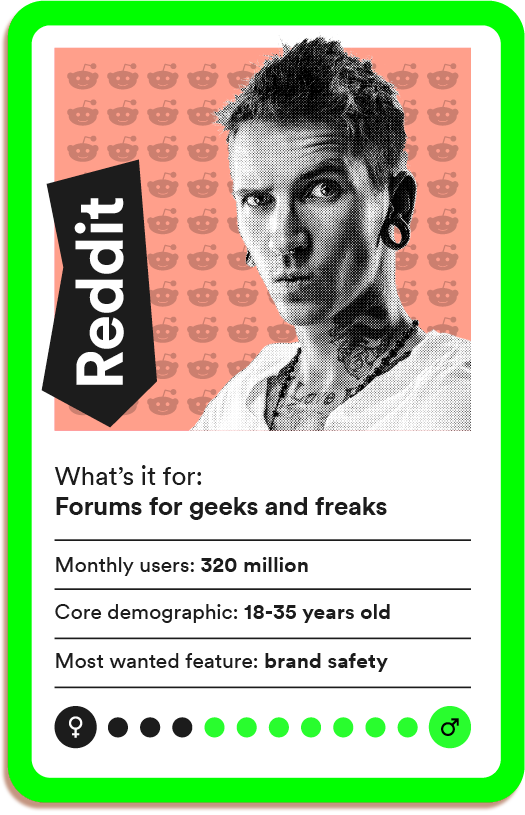 Like Twitch it’s heavily dominated by young men. And for that reason, it can harbour some very strange content indeed – despite thousands of moderators (known as subredditors). Not only that, but Reddit remains the spiritual home of the ‘silence, brand’ meme. Its users are sophisticated media consumers, unafraid of calling out brand BS.

This means brand safety issues just won’t go away, driving out advertising dollars. And because of that, it’s mostly tech. brands advertising on Reddit. So, why would you be prepared to take the risk? Well, its core audience contains one of the most affluent under 30s demographics going: smart, geeky with lots of disposable income. But it’s still a risky play.

At first glance, all these platforms seem to make life more, rather than less, complicated. But we can take a measured view. There’s no need to be omnipresent. As always, it’s about finding the right audience so we can reach them effectively.

One thing that’s great about looking at one of these platforms and thinking ‘I wonder…’ is that validating your hunch should be easy and cheap.

Because of this, the cost of being wrong is small, while the gains from being right are big. This makes it a good idea to test out new platforms alongside other activity. And that has always been a good plan in advertising. ‘Never stop testing, and your advertising will never stop improving,’ as David Ogilvy put it.

To see some of our work, click here for case studies on how we’ve helped BUPA, Pets at home, Silentnight, Marriott, Brother, Wagamama and many more.